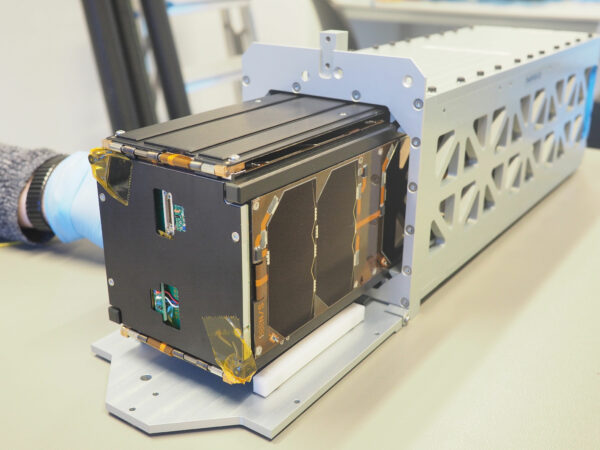 The next Arianespace’s Vega rocket launch, VV16, scheduled for launch on the 1st of September will launch 7 microsatellites and 46 CubeSats, including three CubeSats designed, built, and integrated by ISISPACE: SIMBA, DIDO-3, and NAPA-1.

SIMBA is a 3-unit CubeSat mission designed to measure the Total Solar Irradiance and Earth Radiation Budget climate variables with a miniaturized radiometer instrument. It is sponsored by European Space Agency (ESA) and led by the Royal Meteorological Institute Belgium (RMIB), with ISISPACE as the subcontractor responsible for the design and delivery of the platform for this mission in which the miniaturized radiometer instrument built by the Royal Meteorological Institute Belgium, and the ADCS subsystem developed by KU Leuven University, are integrated. ISISPACE will also perform commissioning and mission operations of the satellite after launch on the consortium’s behalf.

One of the main goals of SIMBA is to study the feasibility of monitoring the incoming solar radiation and the earth’s outgoing radiation. The main payload sensor is an electrical substitution cavity radiometer designed specifically to measure the total radiation. The ADCS, as a newly developed system including an experimental star tracker, will have its maiden flight with SIMBA, and will be tested for its functionality and performance. The satellite also incorporates an FM transponder which will be accessible to the radio amateur community at regular times during and after the conclusion of the nominal missions.

DIDO-3 is a CubeSat with the objective to study the effect of microgravity and low fluid shear with four different experiments on biological material.

In comparison with its predecessor, DIDO-2,  the platform has been upgraded to include an enlarged structure, now in the so-called 3U.XL CubeSat form factor, and deployable solar panels to be able to deliver more power to the payload, required to have the necessary temperature regulation for the experiments to survive the harsh environment in space. The payload is a miniaturized medical laboratory provided by the customer, SpacePharma, which provides end-to-end microgravity services enabling research in the field of medical drugs development in Space.

NAPA-1, meaning Firmament-1 in the Thai language, is the first Earth Observation CubeSat of the Royal Thai Air Force (RTAF). ISISPACE has designed, built, and tested the satellite platform and ground segment, and will deliver the satellite “in orbit” to the RTAF after commissioning. The main payload is a Gecko Imager, from the South African company SCS Space, capable of imaging in the RGB-band with an approximately 39m ground sampling distance from the typical Low Earth Orbit. An experimental secondary payload was added, which is a demonstration model of the TriScape 100 Imager from Simera Sense, with a target ground sampling distance down to 5m from the typical Low Earth Orbit.

The satellite will be part of the Thai government space capabilities program to enhance the monitoring and response to natural disasters, including fires, floods, earthquakes, landslides, and air quality issues. Following this first mission, ISISPACE is building and preparing the launch of NAPA-2, a second satellite with a Simera Sense Multiscape Imager with 7 bands in the visual and near-infrared (VNIR) bands with a ground sampling distance of 5m, to improve the Earth Observation capabilities.