On May 21* the Chinese space agency will launch the relay satellite Chang’e4 to an orbit behind the Moon. On board, will be a Dutch radio antenna, the Netherlands Chinese Low-Frequency Explorer (NCLE). The radio antenna is the first Dutch-made scientific instrument to be sent on a Chinese space mission, and it will open up a new chapter in radio astronomy. With the instrument, astronomers want to measure radio waves originating from the period directly after the Big Bang, before the first stars and galaxies were formed.

*DISCLAIMER: The launch depends on favorable weather conditions, therefore, the launch may be delayed.

The far side of the moon

Why is it so important for the measuring instruments to be placed behind the moon? Professor of Astrophysics Heino Falcke: “Radio astronomers study the universe using radio waves, light coming from stars and planets, for example, which is not visible with the naked eye. We can receive almost all celestial radio wave frequencies here on Earth. We cannot detect radio waves below 30 MHz, however, as these are blocked by our atmosphere. It is these frequencies in particular that contain information about the early universe, which is why we want to measure them.”

The satellite rotates around a fixed point behind the moon – the second Lagrange, or L2, point in the Earth-moon system. This point is located approximately 65,000 kilometers from the moon.

The instrument passed an important risk assessment review by the Chinese space agency at the end of April Marc Klein Wolt, Managing Director of the Radboud Radio Lab, is looking back on the endeavour with a sense of accomplishment: “The last few months have been quite challenging for the Dutch team, who have put in a lot of effort to complete the instrument for the launch as the final phase of a two-year bi-lateral project with our Chinese counterparts. The Chinese lunar programme is like a bus we were trying to catch, mostly due to the hard work and enormous dedication from the teams on both sides”. On April 30, the antenna successfully passed final pre-flight test. Heino Falcke reported: “Antennas were successfully deployed and retracted. Next step in this adventure is L2-point behind moon.” 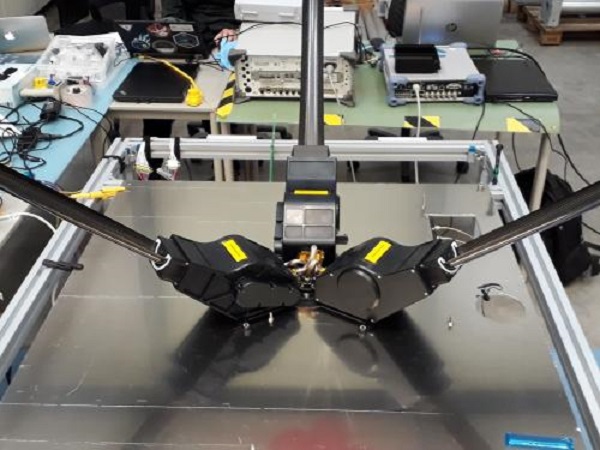 In 2016 the Netherlands Space Office and its Chinese counterpart CNSA signed an agreement to cooperate in this project, which was an elaboration of the Memorandum of Understanding the two space agencies signed the year before during a trade mission in presence of the Chinese President Xi Jinping and the Dutch King Willem Alexander. “NCLE does not only pave the way for new exciting science, but also provides new means for the two countries to expand their international collaboration”, says Mr. Harry Forster of the NSO.