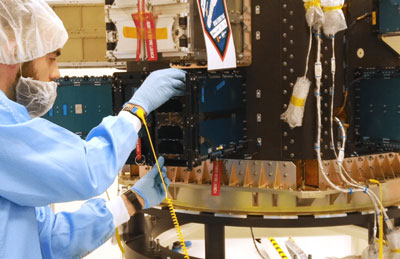 The ISISPACE team successfully integrated the NAPA-1 satellite on the Vega SSMS POC HEX ring. With that, NAPA-1 satellite is armed for flight and ready for its final transportation to the launch base in Kourou, French Guyana. The satellite shall be launched to its orbit of around 530 km, where will start its earth observation mission.

The main payload is a Gecko Imager, from the South African company SCS, capable of imaging in the RGB-band with an approximately 39m ground sampling distance from the typical Low Earth Orbit. There is also a secondary payload, which is a demonstration model of the TriScape 100 Imager from developer Simera Sense, with a target ground sampling distance down to 5m from the typical Low Earth Orbit.