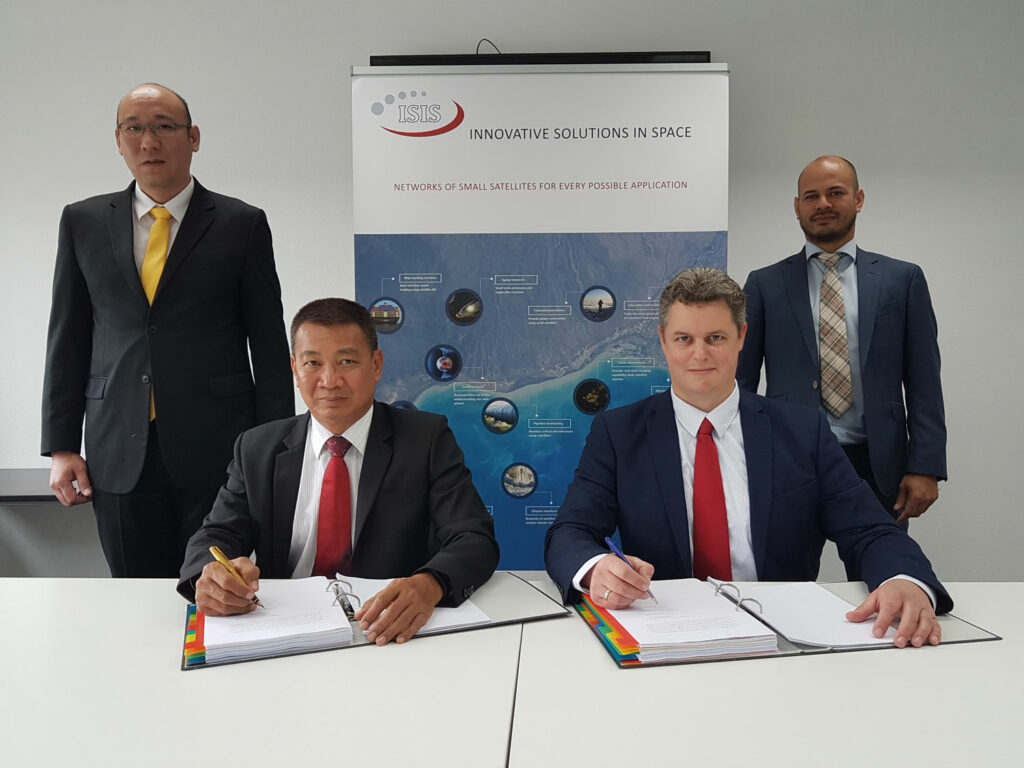 The Royal Thai Air Force has awarded a contract to ISIS – Innovative Solutions In Space B.V. to realize their next satellite mission, based on an ISISpace 6U CubeSat. This will be the second Earth Observation satellite of the Royal Thai Air Force, with the objective to further strengthen their independent space operations for Public Protection and Disaster Relief (PPDR) purposes.

As part of the contract, based on a delivery-in-orbit model, ISISpace is responsible for the full satellite, including its camera payload and propulsion system, the ground segment including mission control, the launch service, and commissioning of the satellite. The contract further includes a training package and extended knowledge transfer on satellite operations, building upon the knowledge gained from the first Earth Observation satellite.

“We are very proud to continue working with the Royal Thai Air Force for their next satellite mission and to further support them in achieving their long-term space operational goals”, said Abe Bonnema, ISISpace’s Marketing Director. “This contract follows the recent completion of the first satellite mission, ready and waiting for launch, and confirms the determination of the Royal Thai Air Force to keep expanding their space-based resources and capabilities”, he continues.

ISISpace, in its role as mission prime, will work closely with several components and service partners, such as Simera Sense and Kubos Corporation, to fulfil Royal Thai Air Force’s mission objectives. The satellite is planned for launch through ISISpace’s launch services subsidiary – ISILaunch, onboard a Soyuz launch in 2020.

ISIS – Innovative Solutions In Space B.V. is one of the leading companies in the fast-growing small satellite market. Founded in 2006, ISISpace operates globally and serves customers worldwide in accomplishing their space missions and applications. The company, based in the Netherlands, is vertically integrated and combines research and development, satellite production, launch services, and operation of small space systems in a single organization. This allows ISISpace to provide the right solution for every customer, from subsystems to full turn-key missions.

More information about ISIS can be found at www.isispace.nl

The Royal Thai Air Force or RTAF is the air force of the Kingdom of Thailand. Since its establishment in 1913 as one of the earliest air forces of Asia.